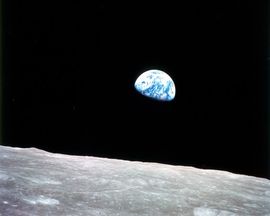 In this age it is given to see Planet Earth from the outside looking in. The only thing which changes it's perspective is the fact that it has been neglected by it's guardians - mankind - for too long.

From a distance... it is speck of stardust within the Cosmos.

From above... a breathing entity of the Universe.

From it's surface...  a paradox of serenity, great power and beauty within the awesome nature of itself.

But up close and personal where pockets of civilization display a writhing mass of  humanity's warmongering lifestyles, it brims with the very waste of life itself.

...  when Mother Nature  revolts to such disrespectful treatment of all things, she  is  declared  inhumane in her fury, while no-one can - as she does - bring both enemy and friend together without time to dispute who is the better of the two to live.

Between hope for Planet Earth's survival and the history of mankind, there is a still Peace when seen in the Light of Truth, that, whether believed or not, he is not alone in the Universe... let alone on earth.

To date, this, has always been Truth.

... that humanity can only be lifted  out of the past of such ignorance.

That free-will is – as was intended to be - a Universal Law.

... for within all the choices made, humans have also been the creator of all their children's future.

... some call it kama, but facts are it is written in one of the commandments as * 'visiting the sins of the fathers of the third and fourth generstion' - and whichever way it is analized - it is still fact. That children inherrit the past of their ansestors.

So it's Time, literally from a planetary perspective, to make choices wisely with what knowledge has been gained... through time.

All waste which cannot be recycled correctly is as destructive as any radio-active human nature.

... and yet any who still wield such waste as that of nuclear energy with knowledge enough to know it too has a life-span, still remain in ignorant belief that it is safe from harms way.

Like human nature, it will in time explode, boil over, erupt, in the same way as pent-up wasted energy, which affects anyone in their path.

' Too Late' - is one way such a truth is seen by any who are more 'in the know' - of this specific waste.

Also like human nature - when a problem is dealt with and solved - a negative is transitioned into a positive, and energy which would otherwise be wasted becomes of 'more worth' in the knowledge of correct utilization.

It is a Truth that nothing should be wasted.  Indigenous folk know this!

Take a look at where Planet Earth is in Space. Believer or not, no-one can change the truth of such a 'speck of dust'.  We are all space beings...

" He stretcheth out the north over empty space, And hangeth the earth upon nothing."

You Are Here... on a Pale Blue Dot